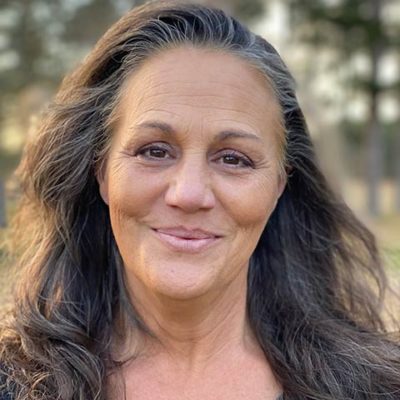 Trina McClendon is the co-founder and owner of Trinity Poultry Farm, LLC in Southwest Mississippi. In 2003, Trina and her late husband, Rusty McClendon, built a commercial poultry operation and started full-time in the agriculture industry. Over the past 19 years, Trina has consistently ranked as one of the top poultry growers in her region of Mississippi.

Trina’s love for farming started as a young girl when her friend’s family bought a farm and she started helping gather eggs, slopping hogs, haying up the cows and riding horses. She made a promise to herself that when she grew up, she was going to marry a man who lived in the country and at the age of 22, she did just that when she married Rusty. With the gift from Rusty’s father of 13 cows they started farming. Rusty and her both held down full-time jobs, in addition to farming. Rusty worked with Coca-Cola for 20 years and she was a secretary.

In 1993 they sold their herd of 70 momma cows and used the money to build their home and start their family. They continued to work 9 to 5 jobs, but Rusty wanted to farm full-time and talked about how he wished he could make a living on the 350 acres his family owned. Chicken growing seemed like the answer to their prayers.

They mortgaged their farm and home for $1.4 million to invest in the chicken business. Trina and Rusty would soon find out that the truth about chicken farming was not what they had been told. As the years passed, they faced new, unexpected stresses that took its toll. They were at the mercy of Sanderson who told them exactly what they could and couldn’t do. Rusty was often very worried that Sanderson could terminate their contract at any time for any reason and that they would lose everything. In December of 2017 Rusty succumbed to the stress and had a massive heart attack, leaving Trina a widow and the sole owner of an eight-house poultry farm.

Trina became a whistleblower following an announcement that the company she worked for was consolidating. In August 2021 Cargill/Continental Grain announced it was buying Sanderson, the only Fortune 1000 company in the state of Mississippi, for $4.53 billion. A couple of days later she was told that Sanderson was offering a “new” pay contract essentially cutting her farm income by one-third. She was told by a company representative that whether or not she signed the contract, she would be given a pay decrease.

Trina McClendon and 45 other Mississippi poultry farms formed an alliance and compiled a list of demands for Sanderson. In addition to reversing the pay cut, they asked for greater transparency, better working conditions, cost of living increases and an end to the tournament system.

On January 19, 2021 Trina courageously shared her story before the US House Committee on the Judiciary, Subcommittee on Antitrust, Commercial, and Administrative Law, “Reviving Competition, Part 5: Addressing the Effects of Economic Concentration on Americas Food Supply”.

Watch Trina’s testimony to Congress below (Trina starts at 31:55):