This article originally appeared on the Bloomberg website. By: Andrew Martin

Trump’s USDA is looking to speed up the slaughter line.

In an Illinois River town where Abe Lincoln once toiled as a country lawyer, the slaughterhouse of the future runs at a speed that generations of Midwestern farmers would have dismissed as fantasy.

At other factories, as many as seven government inspectors are stationed along the slaughter line to look for signs of contamination or disease. Here, in Beardstown, Illinois, workers bear more of that responsibility.

Four federal inspectors officiate like chair umpires at a tennis match. They try to call out potential hazards as carcasses whiz by, before getting cut into chops and hams. Owned by Brazil-based JBS SA, known for its Swift pork brand, the plant is a model of lethal efficiency. It kills up to 21,000 hogs each day—as many as 1,300 per hour.

For the last two decades, with the government’s blessing, the Beardstown factory and four other U.S. hog plants have pioneered this grand—and, to some, unsettling—food safety experiment. Along with operating with fewer inspectors, these meatpackers operate free of a longstanding government safety rule meant to protect consumers from disease.

The federal government usually caps the speed of the slaughter line at 1,106 hogs an hour. At these plants, as part of a government pilot program, companies can run them as fast as they like.

The Trump administration wants to offer the Beardstown model to other slaughterhouses and estimates 40 plants will ultimately participate. Collectively, these process more than 90 percent of the 120 million hogs killed in the U.S. every year.

The program is part of a broader mission to promote economic growth by easing regulations in industries from energy to utilities to, now, food. The faster line speeds, which may be approved nationwide as early as April, could generate an extra $2 million a year for the average big plant, the government estimates.

What’s more, the U.S. Department of Agriculture says flexible oversight would lead to better control of pathogens and safer conditions for workers. In written comments on the proposed plan, Jim Heimerl, president of the National Pork Producers Council, stated that the USDA should be commended for for “identifying ways to partner with industry” to improve efficiency and food safety.

But interviews with employees and inspectors, as well as the government’s own data and internal reports, raise serious questions about the wisdom of rejecting past methods. Federal auditors concluded that the USDA’s experiment includes too few plants to justify broad changes to inspection for all hog slaughterhouses. Scientists and advocates have labeled the USDA’s claims misleading and cherry picked.

“For the USDA, this has never been about public health,” said Amanda Hitt, director of the Food Integrity Campaign at the Government Accountability Project, an advocacy group for whistleblowers. “This has been about enriching the very industries they are supposed to be regulating.” 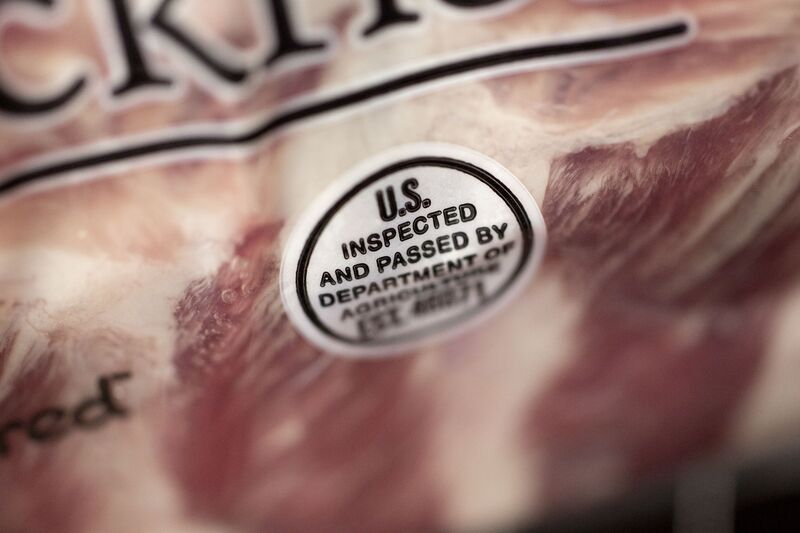 A U.S. Department of Agriculture inspection stamp on a package of baby back pork ribs.
Photographer: Daniel Acker/Bloomberg

For decades, the USDA has pushed to overhaul food inspection, arguing that having government overseers poking and sniffing every carcass doesn’t address microscopic hazards such as salmonella and E. coli. Under the current system, inspectors spend too much time on quality defects that have little to do with food safety, the agency says. Each year, food sickens 48 million Americans, one-fifth of them from eating contaminated meat and poultry, according to U.S. Centers for Disease Control and Prevention.

The Beardstown inspection system is based on a food safety model, which was developed by NASA and has a mouthful of a name: Hazard Analysis and Critical Control Point, or HACCP. Privately, inspectors say HACCP stands for something else: Have a Cup of Coffee and Pray.

“It’s as fast as you can, and that’s it,” said a federal inspector who works at one of the pilot hog plants and requested anonymity for fear of retribution. The inspector said company and government officials discourage documenting negative findings. “It’s been crammed down our throats: Do not impede the right to do business.”

A USDA spokeswoman said she wouldn’t comment on “hearsay, rumors or employee matters that originate in personnel complaints,” but she added that intimidation or interference with inspectors is prohibited.

Agency officials denied relying on dubious data and said the USDA had sufficient analysis to conclude that Beardstown model is safe and effective. Carmen Rottenberg, acting deputy undersecretary for the agency’s food safety division, said line speeds would never operate faster than an inspector’s ability to examine carcasses. If it did, she said, “the inspector could slow it down.”

Government auditors, scientists, members of Congress, and consumer groups have challenged attempts by the USDA to expand the Beardstown-style experiment. In 2013, the USDA’s Inspector General said the agency’s oversight of the five hog slaughterhouses was so shoddy that it didn’t assess if food safety had improved—a key goal.

That same year, the Government Accountability Office, a Congressional watchdog, said results from five plants “would not provide reasonable assurance that any conclusions can apply more broadly,” because of the small sample size.

A year later, in 2014, the USDA released its own analysis, and the results were more favorable. The report now underpins the agency’s support of the hog inspection proposal, even though 60 Democratic members of Congress, in a January 2016 letter, described its findings as irrelevant to the pilot plants’ food safety performance or lacking “an adequate evidentiary basis.”

In February, based on inspection reports obtained through the Freedom of Information Act, the consumer advocacy group Food & Water Watch documented serious violations, including fecal contamination and diseased carcasses that employees had failed to remove from the slaughter line at the pilot plants.

“These pilot plants were doing worse than regular plants with more inspectors on the line,” said Tony Corbo, a senior lobbyist at Food & Water Watch. The USDA’s Rottenberg said Food and Water Watch skewed its analysis to promote its own fundraising. which Corbo denied.

Another advocacy group, the National Employment Law Project, concluded that the USDA’s own data didn’t support its suggestion that the proposed inspection system would be safer for workers, based on a comparison between the pilot plants and 29 traditional ones.

“It’s really a bogus analysis, where they compared large and small plants with varying years of data,” said Deborah Berkowitz, the law project’s worker health and safety program director. Rottenberg notes that Berkowitz was chief of staff of the U.S. Occupational Safety and Health Administration under Obama.

The hog inspection proposal is similar to a 2014 overhaul of poultry plant inspections—based largely on data from 20 chicken slaughterhouses in a related pilot program. In that case, however, the Obama administration decided against increasing line speeds amid concerns about worker safety.  In September, the USDA said it would let chicken plants, if they met certain requirements, increase line speeds to 175 birds per minute, up from 140.

Some workers say the faster line speeds at meat and poultry plants pose dangers.  When the Beardstown factory runs at full capacity, employees have about have 13 seconds to pull a tongue out of a hog’s head, according to Sergio Ruiz, a union steward who has worked 25 years at the plant. That pace heightens health risks, including carpal tunnel syndrome, Ruiz said. “More repetition, more injuries,” he said.

JBS’s plant has the largest slaughter capacity of the five in the pilot program. The company provided data showing that worker and food safety have improved since it purchased the plant in 2015.  “Beardstown has been a success by almost any measure,” said Cameron Bruett, head of corporate affairs.

The meat industry appears to be thrilled with the new approach. In 2016, a trade group, the North American Meat Institute, gave its public service award to Al Almanza, a longtime top food safety official at the USDA. Almanza defended faster line speeds, shepherded the poultry inspection rule and suggested changes to hog inspection would be next.

He retired from government work in July 2017, before the hog inspection rule was published. His new job? Global head of food safety and quality at JBS, owner of the Beardstown plant. Almanza declined a request to be interviewed.

JBS, in a statement, said it disagrees “with any notion” that Almanza or other government food safety employees “would have any interest in maximizing industry profits over safeguarding the health of American families.”