At FIC, I’m inspired by truth-tellers who act beyond themselves and speak out against some of the world’s most powerful and dominant institutions and corporations. Recently, I attended a community event in Rocky Mount, NC organized by North Carolina Environmental Justice Network (NCEJN). The public event focused on community activist, Elsie Herring, and her North Carolina community as they fight the world’s largest pork corporation for the freedom to enjoy fresh air, clean water, and live a life without the stench of manure. The afternoon included a community meal, live music, a documentary screening and community discussion. I was in the room with courageous heroes involved in the fight for environmental justice from the past to the present day. This day motivated me to continue my personal commitment to truth.

My story and commitment to truth

I’m Briana Steele, Food Integrity Campaign Program Officer. In my role, I use our digital communication platforms of social media, email, our blog and website content to share the stories of our food whistleblowers, drive our campaigns and engage our supporters to act. I believe in the power of storytelling to share personal narratives, evoke emotions and move people to action.

I’m a North Carolinian, born and raised. Growing up I saw environmental injustice around me (even if I couldn’t articulate it as such at the time). I come from a lineage of Black farmers, outdoorsmen, and folks who made their livelihoods working in agriculture, meat processing and the food industry in rural North Carolina. I come from a family with roots in rural counties that have experienced the proliferation of the poultry industry. My family’s homeplace is surrounded by properties with poultry concentrated animal feeding operations (CAFOs) that supply some of the nation’s largest chicken companies. It’s taking a toll on the quality-of-life of my loved ones every day and inspired my educational and professional pursuits.

When I was an undergrad college student, I worked as a lab assistant at the UNC Gillings School of Global Public Health testing water samples for fecal coliform bacteria. The water was collected from streams near hog CAFOs in Eastern North Carolina. I got to work under a post-doc student doing work led by Dr. Steve Wing, a well-respected epidemiology professor, teacher, environmental justice activist and human rights advocate. I learned further about environmental justice through supporting the activities of scientists and researchers with conscience and heroes like Dr. Wing. By knowing who I am, in terms of family lineage and history, and as a result of life encounters and experiences, I got involved in speaking truth to power. There’s no doubt that the culmination of my experiences led me to FIC. I’m able to work with exceptional people, helping them speak their truth.

Can you imagine fighting for decades to ensure you have a basic quality of life? Elsie Herring did just that. She took great risks to fight for a better future not only for the present generations but the generations to come. The heroic community activists celebrated at the event I attended devoted their lives to fighting environmental injustice in the face of intimidation, threats, illness, stress and trauma.

The courageous Rene Miller, a resident of Eastern North Carolina, was a vocal presence at the event. She has courageously spoken up about the impact of the hog industry on her community. FIC took a trip to North Carolina to see firsthand the impacts of industrial agriculture and met with Rene Miller. You see it, you smell it, the particulates infiltrate your respiratory system. Manure settles upon your child’s bike and outdoor play toys, your front porch and makes its way inside your home to the walls and refrigerator door. Rene, sitting on her front porch, captured a video of hog waste being sprayed on fields across the road. The problem is undeniable.

Another hero that was given honor and recognized at the event was Don Webb. Don Webb was the first farmer in NC recruited by the Smithfield founder to have a hog growing contract with Smithfield. Mr. Webb was a farmer but quickly saw the damage from industrial animal agriculture and no longer wanted to participate in the harm caused by this system. He decided to speak out against the giant company as a former contract hog farmer and faced a lifetime of resistance. Until his death, he never stopped speaking truth to power. His immense resolve to oppose the status quo was powerful. Hearing his story reminded me of our contract poultry growers turned farmer whistleblowers speaking out against the poultry industry. 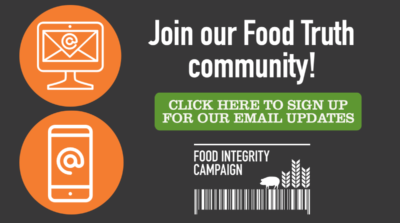 In addition to work done at the national level, FIC is a member of a statewide coalition in NC working to fight issues of environmental injustice stemming from industrial animal agriculture and concentrated animal feeding operations (CAFOs). As a North Carolinian and a representative of FIC, it was personally important to me to be at this event. It was incredibly valuable to participate as a coalition member, meet community members and learn more.

It’s important to know that factory farm pollution in North Carolina has a disproportionate impact on Black and Brown communities. Along with other groups, we filed a legal petition with the Environmental Protection Agency (EPA) to enforce federal air pollution laws against factory farm polluters, something the agency has refused to do for two decades. FIC recently signed an organizational letter with 218 groups to EPA Administrator Michael Regan, demanding the agency protect communities from the harmful impacts of factory farms.

My oath to heroes

I stand for truth-tellers. I feel immensely grateful to be in the presence of truth-tellers from various backgrounds like community advocates, farmers, public health researchers, and more at this event and through my work at FIC. Fighting government and industry giants alone can be a daunting task. Therefore, we must ensure whistleblowers and truth-tellers feel supported and uplifted. There is power when we are in community with each other. The fight for clean air, clean water and a life free from the stench of CAFOs is not isolated to NC. It is an issue in other states and a global issue. When we see ourselves connected to other people as part of a larger struggle, we can draw greater strength to conquer the Goliaths of the world. More stories are out there and need to be told about courageous heroes. And that’s what motivates me to do the work I do every day.